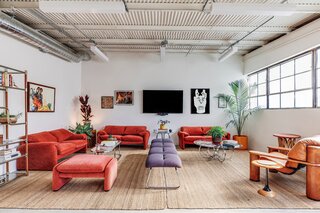 When award-winning film and TV production company Epic was incorporated into Vox Media and the new Los Angeles headquarters was under construction, its cofounder Josh Bearman looked toward his own home as the source of inspiration. In the Epic days, Bearman used to host meetings in a converted garage in his own backyard that was decorated with tasteful vintage pieces. People would always be very impressed, as taking meetings in a backyard with tasteful vintage decor was an experience that people didn’t typically have, recalls Bearman’s partner Rachel Rosenfield, the textile and interior designer in charge of bringing to life Vox/Epic’s L.A. headquarters.

For the new office, Rosenfield and Bearman wanted to steer clear, in equal measure, of what they describe as the early 2010s “adult playground aesthetics” of the tech and startup world, and the anodyne sleekness of new-media workspaces. “I wanted to make all the common areas have vintage pieces, hardware, and fixtures where possible,” says Bearman, who equates his own aesthetic to “Victorian mansion” style, but adds, “if you try to do that on a big scale, then it feels like a Disneyland ride.” Rosenfield reined in this style while maintaining its core. “I wanted it to feel like a very unique home; a place you would go visit your aunt and uncle who traveled the world as a child,” she says. Conveniently, the office is located in a former automotive industry building with cement floors, a corrugated-metal roof, and very high ceilings, so, by its own nature, it staves off the Mystery Mansion vibe.

“The space itself is unconventional, so the challenge was to really focus on making it a livable, warm environment,” Rosenfield says. The designer filled the spaces with jewel- and neutral-toned couches and lounges and added richly patterned, bold colored rugs to create flexible environments around the office where employees can work independently, hold impromptu meetings, or take a brief reprieve. “Even before the pandemic, I would go into the office and see all of the staff kind of hanging out in the lounge zone and not at their desks,” Bearman says. While the Vox/Epic headquarters was completed in early 2020 just before lockdown, “the design has turned out to be kind of useful for the transition back to an office,” he adds. “Since the place was designed where the common areas are meant to feel like a living room or dining room, it’s inadvertently also been a little bit of a bridge from working at home to back in the office, because people are so used to working with their laptops on the couch.”

“People worldwide have become accustomed to working in their homes, and that is, moving forward, probably the type of environment people will really enjoy working in.”

Bearman and Rosenfield’s vision for the Vox/Epic headquarters is part of a larger pandemic-induced trend in which the boundaries between our homes and white-collar workplaces have become increasingly blurrier. In nearby Venice, for example, local design studio Part Office recently converted two condominium buildings into 12 live/work lofts meant to house small startups. “We really did push the residential boundary [of the interiors] pretty far, to the point that we had some pushback from the marketing team,” says Part Office cofounder Kristin Korven. Each unit consists of a lower “residential” floor with several adjustable common spaces including a compact kitchen, as well as an upper “working” loft that’s more reminiscent of traditional conference rooms, and a roof deck.

The firm’s goal was to approach the project through a more residential lens, “much in response to how the past few years shifted our ideas of what an office should feel like,” which, Korven says, is a trend she’s seen more of frequently—and not just in office design. “Even currently, as we design residences for people who are still working at home, the clients don’t want us designing home offices for them,” she says. “They have already assimilated to the idea of: I know I want to work at my dining table. I know I want to take my laptop out on my back patio or on my couch. People worldwide have become accustomed to working in their homes, and that is, moving forward, probably the type of environment people will really enjoy working in.”

Recent research supports the notion that many people who previously worked full-time in offices no longer feel like their work has to be bound to a designated space. A new study from Gusto, a company that provides cloud-based payroll, benefits, and human resource management software, found that for all types of workers on its platform, the number one factor in accepting or declining a job offer is flexibility—namely, the ability to work from home some or all of the time. “Work shouldn’t feel like a drudgery and has many faces,” says Shannon Gaffney, founding partner at SkB Architects, which spearheaded the design of the Seattle office and showroom for objekts, a boutique furniture and accessories procurement firm. Located in the Belltown neighborhood, the office is what the firm describes as “hospitality forward,” with amenities such a bar, kitchen, library, and several multifunctional meeting rooms and “entertainment” areas. The design’s guiding sentiment, Gaffney says, is that analytical computer work can be done at a traditional desk or a couch, and things like long dinner tables can easily become stages for business meetings or presentations.

This same concept is apparent throughout Vox/Epics’s L.A. headquarters. In the main entryway, for example, a casual lounge area is anchored by a chenille curved Serpentine sofa—which Rosenfield bought sight unseen on Etsy—that reminds of a ’90s-inspired couch your design-minded friend might have in their apartment. Another gathering space in the office café is framed by vintage reddish-orange Maralunga sofas and a brown leather lounge chair. “There’s also a purple airport bench and the green of the plants; together they create this whole color story,” Rosenfield says.

Such emphasis on colors and materials is part of another emerging design trend involving a shift toward tactile environments. “The implication is to create places that have soul and craft and are not sleek, slick, or machined,” Gaffney says. “Human touch is important and evocative; we joke that if the client starts petting a material, the meeting is a success.”

Even with such an emphasis on comfortable communal areas, privacy is still respected. In the live/work lofts by Part Office, rows of accordion doors with porthole windows can be closed to separate the lower-level common spaces to various degrees if one area is needed for a meeting. SkB Architects designed the objekts office with transparent-block meeting rooms that are bookended by steel-framed sliding glass doors to offer spatial flexibility. Meanwhile, at the Vox/Epic office, there’s an added element of escapism: The two private booths where employees can take meetings and phone calls feature forest and underwater motifs (respectively), with themed wallpaper and decorative items such as a lamp shaped like a shell.

It’s easy to dismiss this residential-inspired aesthetic as the more sophisticated (or timely) version of the ridiculous era of Silicon Valley office “playrooms,” which skeptics could argue had similar motives: to keep employees in the workplace. Whether we can really design offices that people want to come back to despite the shift to WFH culture remains unanswered. But after more than two years of using our living spaces as work environments, it’s only natural to be accustomed to the physical comfort of couches and armchairs—and the lack of eerie, artificial overhead lights!—while also yearning for a reprieve from our everyday personal surroundings.

As it turns out, Bearman needed some variation too, at least from his typical go-to aesthetic. His executive office at the Vox/Epic headquarters lacks the Victorian influence he usually covets. Instead, it’s decked in blonde wood and furnished with a wicker étagère by Arthur Umanoff and a vintage Brazilian lounge set. “It sort of seems like my uncle Jerry’s house in Miami in 1985,” Bearman says. “Rachel foisted this new aesthetic on me, which I would have resisted, but I was like, You know, I’m gonna give this a try. Then it really came together, and now I love it.”

Architects and Designers Weigh In on the Future of Work

Make Over Your Home Office With These Game-Changing Goods